Six weeks before the Challenger catastrophe (1/28/86), I bought my first home. I moved from Philadelphia’s Germantown section, where I’d spent eleven years as an apartment-dweller, into the magically wonderful, Montgomery County neighborhood of Glenside. Rich, my soon-to-be-husband, and I had always been space program buffs. He had helped design batteries for space missions like the Jupiter probe. Even those who didn’t routinely follow the shuttle missions, however, were captivated by the idea of lessons from space. 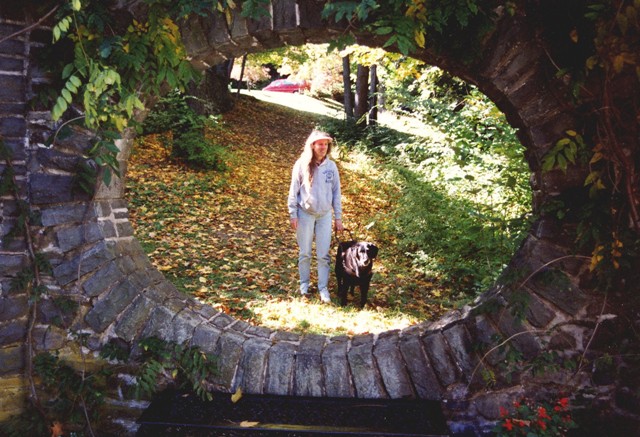 This picture of me with Curly Connor, my black, Golden-Lab guide dog, was taken by Rich Hill at Grey Towers Historical Site in Milford, Pennsylvaniaa. I couldn’t find one of us performing downtown.

On the day of the mission, I did what I did at least three times a week. I donned my heavy back pack — filled with water, rugs and sweats for my dog and copies of my first recording, Rainbow Colors on LP and cassette. After a twelve minute walk, we boarded the train in Glenside and got off in Philadelphia’s Suburban Station. My guide dog, Curly Connor, guided me to Rizzo’s Pizza Restaurant in the below-street-level corridor between 15th and 16th and Market.

The manager, an amateur boxer named Ray, brought my guitar out from where they kindly stored it for me, and I trudged off to my “spot” in the concourse to set up for six hours of performing. It was what I did. From 1978 through 1990, I was a street performer.During the summer, I sang at Penn’s Landing, near the U.S.S. Olympia and the WWII sub, the Becuna.

It was a physically challenging way to make a living. I played and sang for about three hours, took a break for lunch and played for three more hours, dropped off my guitar at Rizzo’s and took the train home. I had given up sugar and caffeine and was probably in the best shape of my life.

How I Learned of the Challenger Disaster

Sometimes, I visited schools and did assemblies about my guide dog. This ongoing connection with the education profession and young people made me even more interested in Christa McAuliffe, the New Hampshire teacher who had won a nationwide contest to fly as a civilian, much to the delight of the kids around the country who would be allowed to watch the launch in school.

I, however, had to work, and didn’t have time to glue myself to the TV. So, I went downtown, as usual. But, it quickly became apparent that something was wrong. People were much too quiet.

I finally asked a woman who had stopped to drop a few coins in my guitar case, and she told me the Challenger had exploded. I packed up at once and went home, feeling guilty for standing there and singing and not having known.

Later that day, after listening to President Reagan’s speech to the nation, I wrote the following song. The Sound Cloud audio player is after the lyrics.

Verse 1:
The skies were blue over Florida,
The shuttle had nicely cleared the tower
Our heartfelt pride, we couldn’t hide
so much was riding on that hour.

A school teacher from New Hampshire,
A Hawaiian engineer,
Lessons from space, the Spartan Halley comet-chaser,
Who could know the end was so near?

Bridge 1:
In a fiery blast, it happened so fast
In a harsh reality
We saw their lives and dreams, in fragments and streams
Scattered on the deep blue sea.

Chorus:
The future belongs to the brave,
The faint hearted fall by the way
With hard work and prayer
we’ll get there, we’ll get there,
Take the Challenger’s challenge every day.

Verse 2:
Our hearts are blue in America,
For our seven heroes and their kin,
We wonder why they had to die,
And dare we ever take that chance again?

Francis, Michael, Ellison,
Christa, J.R., Greg and Ron,
Captain and crew, we love all of you,
And your courage will help us go on.

Chorus:
The future belongs to the brave,
The faint hearted fall by the way
With hard work and prayer,
we’ll get there, we’ll get there,
Take the Challenger’s challenge every day.

Listen to The Challenger’s Challenge

For More Information About the Challenger

Also, the December, 2016 issue of Popular Mechanics has a great article. I can’t find it free online, so go pester your favorite mechanic.

Challenger via photopin All rights reserved by the author

Donna W. Hill is a writer, speaker, animal lover and avid knitter from Pennsylvania's Endless Mountains. Her first novel, The Heart of Applebutter Hill, is an adventure-mystery with excursions into fantasy for general audiences. Professionals in the fields of education and the arts have endorsed it as a diversity, inclusion and anti-bullying resource for junior high through college. A songwriter with three albums, Hill provided educational and motivational programs in the Greater Philadelphia area for fifteen years before moving to the mountains. Her essay, "Satori Green" appears in Richard Singer's Now, Embracing the Present Moment (2010, O-Books), and her cancer-survivor story is in Dawn Colclasure’s On the Wings of Pink Angels (2012). From 2009 through 2013, Hill was an online journalist for numerous publications, covering topics ranging from nature, health care and accessibility to music, knitting and chocolate. She is an experienced talk show guest and guest blogger and presents workshops about writing and her novel for school, university, community and business groups. The Heart of Applebutter Hill is available in print and e-versions at Amazon, B&N, Apple, Sony, Smashwords, Create Space and other outlets. It is also available through Bookshare for readers with print disabilities.
View all posts by Donna W. Hill →
This entry was posted in authors, memoir, songwriting, Uncategorized and tagged American history, Challenger 30th Anniversary, Challenger Legacy, music, NASA, songwriting, space shuttle, Where were you when. Bookmark the permalink.