knitting a Pie for Pi Day

The round dish cloth I am knitting not only resembles a pie, with its eight wedges and peaked edging; it also follows the revered number Pi in several ways. First, anything circular, including my cotton dishcloth, already has a connection to pi. Pi is the ratio of the circumference to the diameter of a circle.

The circumference is the outer edge, the line you draw when you draw a circle. imagine walking along the perfectly curved outer edge and measuring it as you go. The diameter is the straight line you draw to split the circle in half. Measuring it can be done easily with a ruler.

The magic of mathematics has determined that the ratio between these two numbers is a “constant.” No matter how big or small the circle is, that ratio will always be the same. And who said you can’t count on anything anymore?

According to Pi.org, “Pi Day is celebrated on March 14th (3/14) around the world. Pi (Greek letter “π”) is the symbol used in mathematics to represent a constant — the ratio of the circumference of a circle to its diameter — which is approximately 3.14159.

“Pi has been calculated to over one trillion digits beyond its decimal point. As an irrational and transcendental number, it will continue infinitely without repetition or pattern.” http://www.piday.org/ 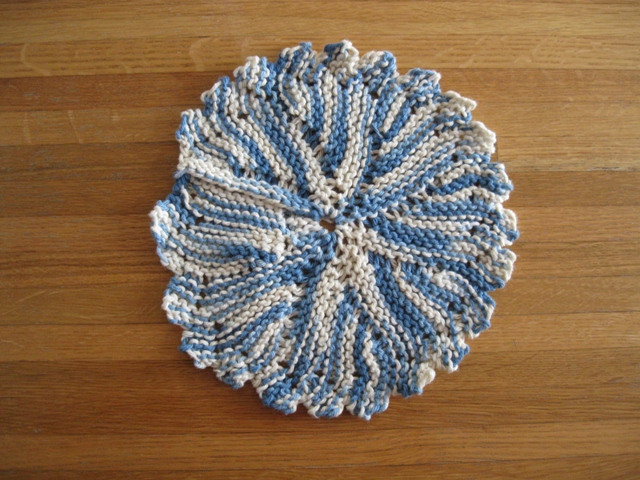 I like the image of “an irrational and transcendental number,” that will continue infinitely without repetition or pattern. In fact, I might just make that my life’s goal. For today, however, I will share my musings on knitting Pi.

Knitting a Round Dishcloth

Now, for you knitters who want to give it a try. The pictures show the original Round Dish Cloth from Mielke’sFiber Arts: http://www.mielkesfarm.com/dishclth.htm

I made many of these before deciding to see if I could make something that was less open and therefore less fragile. yes, I use them as dishcloths, and we don’t have a dishwasher, so they get a lot of use. And, no, I am not complaining; I had a dishwasher once & I prefer doing them myself.

This pattern which is done back and forth and not in the round, relies on a technique called short-row knitting to create a curved shape. It is also used in making heels in socks, darts in sweaters etc. In short-row knitting, we have two choices – either knit less stitches every right-side row or knit more.

Mielke’s folks decided to do the former. That’s why the dishcloth is so lacey looking with a starburst of open-work flanking the eight wedges. I tried that and now exclusively use the opposite approach – knit one more stitch every right-side row. The most amazing thing is that it doesn’t change the overall shape.

Use your favorite cotton yarn (any fiber will due, if you’re going to use it as a doily), and your favorite size needles for working with that yarn. I like Peaches and Creme cotton yarn on size 7 needles. You’ll need one marker, one yarn needle and one stitch saver to use to pin the work together for finishing. BTW, “SM” means “slip marker.”

CO 15 sts using the knit-on method. Place a marker on the needle after you’ve cast on 10 stitches to separate the short-row area from the edging. Your yarn tail will be at the center of what will soon become a circle.

You can use a 3-needle bind-off to join the beginning and end, but I prefer grafting (aka Kitchener stitch). What I do is to start the grafting in the 19th row of the final wedge. I cast off the 3 stitches for the final peak and replace the stitch to the left-hand needle.

Then, pick up 15 sts. along the cast on edge. Line up the two needles with the points to your right and the yarn coming out of the first stitch on the back needle. I like pinning the work together a couple of inches below the needles.

Cut the yarn giving yourself about four-times the length of the 15 stitches. Thread working yarn into yarn needle.

Repeat for back needle so only 14 stitches remain on each needle. Then, do this whole thing over and over until only one stitch remains on each needle. Enter the front as if to knit and remove from the needle and do the same for the one on the back.

Work the yarn needle through the inner edge stitches in the center of the circle and adjust the tension to your liking before tying together with the original tail yarn and working in the ends.

Donna W. Hill is a writer, speaker, animal lover and avid knitter from Pennsylvania's Endless Mountains. Her first novel, The Heart of Applebutter Hill, is an adventure-mystery with excursions into fantasy for general audiences. Professionals in the fields of education and the arts have endorsed it as a diversity, inclusion and anti-bullying resource for junior high through college. A songwriter with three albums, Hill provided educational and motivational programs in the Greater Philadelphia area for fifteen years before moving to the mountains. Her essay, "Satori Green" appears in Richard Singer's Now, Embracing the Present Moment (2010, O-Books), and her cancer-survivor story is in Dawn Colclasure’s On the Wings of Pink Angels (2012). From 2009 through 2013, Hill was an online journalist for numerous publications, covering topics ranging from nature, health care and accessibility to music, knitting and chocolate. She is an experienced talk show guest and guest blogger and presents workshops about writing and her novel for school, university, community and business groups. The Heart of Applebutter Hill is available in print and e-versions at Amazon, B&N, Apple, Sony, Smashwords, Create Space and other outlets. It is also available through Bookshare for readers with print disabilities.
View all posts by Donna W. Hill →
This entry was posted in Knitting, Mathematics, Uncategorized and tagged dishcloth, knitting, math, Pi Day, short-row knitting. Bookmark the permalink.