Many thanks to Utah novelist Traci McDonald for inviting me to participate in the Writing Process Blog Tour. Traci is the author of the romance novel Killing Casanova (Crimson Romance 2012). Her follow up novel Burning Bridger is in the works. 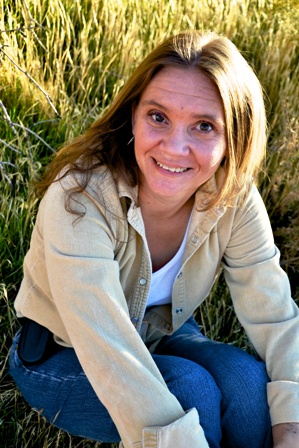 Traci, who has been blind for eighteen years, began writing full time after recovering from a kidney transplant in 2009. She credits modern technology and good training with enabling her to enjoy all facets of being a mother, music lover, reader, writer, and a history enthusiast.

After my answers to the four standard questions, I will introduce the authors who will be participating in next week’s Writing Process Blog Tour

What are you working on?

The Autumn Butterfly, next in the Applebutter Hill series, follows 14-year-old refugees Abigail and Baggy as summer ends and they head back to school. They soon learn that they aren’t the only ones who know about the powerful but unwieldy Heartstone of Arden-Goth.

The title refers to the “aki no choo” (Japanese for autumn butterfly(, a small crystal ball containing a blue butterfly with a pink heart on one wing. The crystal is cut so that the butterfly appears to move. In The Heart of Applebutter Hill, Rutherford tells them to carry one at all times. Can it help them escape from the growing band of power-hungry people interested in acquiring the Heartstone at any cost?

The bulk of my time, however, is spent trying to advance diversity in Young Adult literature. Abigail is losing her sight and has a guide dog named Curly Connor. Promoting the book to the public, as well as the diverse and scattered population of visually impaired people and professionals who could use it to advance social justice (especially for blind girls and women), is a more than fulltime job. Sometimes, I just have to stop myself and succumb to the awkward metamorphosis that transforms me from the marketer/promoter to the fiction writer, the one who started this whole thing in the first place.

How does your work differ from others of its genre? 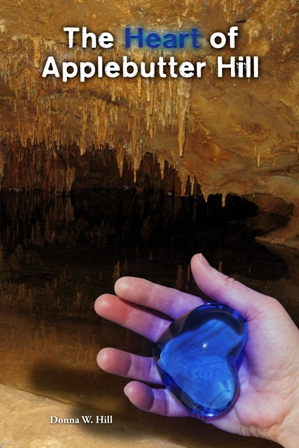 The Heart of Applebutter Hill is commercially classified as either a Young Adult novel or a fantasy. I, however, think of it as “a high school adventure-mystery with excursions into fantasy for general audiences.” Although the setting is fictional, most of the book takes place in a realistic environment. Making seamless transitions between reality and fantasy is one of the great challenges and joys of my writing process.

What really sets The Heart of Applebutter Hill apart, however, is the way in which it portrays a member of the most marginalized minority — people with visual impairments. Most YA novels featuring blind girls focus on the acceptance of blindness or the transition to the use of nonvisual adaptations, such as Braille and text-to-speech software. Abigail, although she is learning these skills, is primarily involved with her best friend, photographer and mechanic Baggy, and the secrets they discover in the course of their adventures. Abigail’s blindness is not dwelled upon, and it’s not ignored.

Why do you write what you do?

I was bitten by the publishing bug when my four-line poem was published in elementary school. I spent twenty years as a self-promoted singer-songwriter/recording artist, presenting programs about blindness and motivation for k-12 schools.

I’ve also written articles for print and online publications about blindness issues, including the Braille literacy crisis and the lack of accessible classroom materials, websites and so on. For five years I volunteered as a publicist for the National Federation of the Blind and placed stories about exceptional blind people with newspapers and other media.

I am motivated because beautiful young people with intelligence, talent and grit are still forced to fight the battle of their lives for inclusion in a world that too often dismisses them as incapable of making valuable contributions. Public ignorance, fear and pity result in unnecessary roadblocks such as low expectations, a lack of accessible books, web and software designers who fail to build in the 1s and 0s which would make their sites accessible to people using screen readers and a general atmosphere of shunning and bullying.

I’ve sung about it, spoken about it, written articles and memoirs about it and now I’m using fiction to try to break through the social stigma. By giving readers an exciting adventure featuring a fully-fleshed character with skills and flaws, dreams and nightmares, I hope to play a part in awakening the sighted world to our common humanity.

How does your writing process work?

My main characters, Abigail, Baggy and Curly Connor are reality-based and had been floating around in my mind for many years prior to my knowing how to tell their stories. I like to experience a story in my head before committing it to words. I walked in the fictional town of Applebutter Hill and mapped it out in my imagination. There was a lot to make up between the school, the carriage house and the old Victorian where Abigail and her guardian live. Then, there was Abigail’s trip to the mountains to visit Baggy.

Similarly, I imagined in detail the settings in the fantasy world, such as the Castle of Bar Gundoom and the land of Satori Green. The innermost domed courtyard of the Castle of Bar Gundoom is an ultra-embellishment of the “Finger Bowl” at the Grey Towers National Historic Site (Milford, Pennsylvania). Grey Towers is the ancestral home of Pennsylvania Governor Gifford Pinchot (1865 – 1946), founder of the USDA Forest Service.

I also invented the Cloud Scooper and the virtual reality classroom called the Nickel Room. I need to know all of these settings thoroughly. In addition to providing material for the book, an intimate acquaintance with the setting enables me to live and learn there, keeping my focus inside the novel’s internal reality.

I worked out the back-stories for the characters and the Heartstone and set up a calendar to outline the various plot threads. The Heartstone was inspired by a passage in C.S. Lewis’s The Silver Chair. Many of the incidents in the book were taken from my own experiences.

My philosophy about fiction writing is that it is like journalism. You get the details of the story, confirm them, write them down and start editing.

next week: Phyllis Campbell, author of Out of the Night & Amy Krout-Horn, author of My Father’s Blood

Next Monday, it will be my pleasure to host two extraordinary authors. 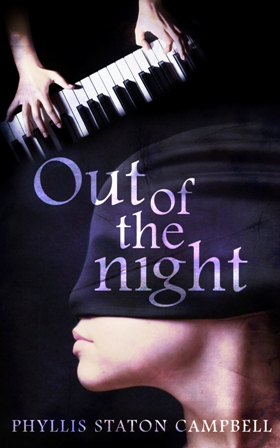 Phyllis Campbell, author of the new suspense novel Out of the Night (2014), has been writing since the ’60s. Her first novel was Come Home My Heart (Avalon Books, 1986). Friendships In The Dark (Brett Books, 1996), her memoir about growing up blind, was picked up by St. Martin’s Press (1997) and translated into Chinese (Sea Breeze, China, 1998. Who Will Hear Them Cry? and A Place to Belong were self-published in 2012.

Out of the Night is a gripping tale of two women, two centuries, and one man determined to destroy them even from the grave. Chris has faced many challenges in her twenty-one years of life — a mother more involved with her career than with her daughter, a father who deserted his family also to pursue a career, and the loss of her sight. Nothing, however, has prepared her for the challenge faced by her and the four other clients attending an independence center held in a historic building on the campus of the school for the blind.

Phyllis, who writes two bi-monthly columns for the Our Special magazine (National Braille Press), serves as organist at Faith Lutheran Church in historic down town Staunton, Virginia. She teaches piano and voice, specializing in Braille music.

Born in Amherst County, Virginia, Phyllis moved to Staunton at age seven. She is a graduate of The Virginia School For The Deaf and The Blind, and went on to study at Lynchburg College in Lynchburg, Virginia, and Dunsmore Business College in Staunton. She took further courses from the Hadley School For The Blind (Winnetka, Illinois). in 1989, she received their Lifelong Learning Award. She has worked as a music teacher, peer counselor, computer tutor, and as Youth Transition Coordinator.

Pick up your favorite electronic version of Out of the Night from Smashwords – available e-versions include .mobi (Kindle), .epub (Apple, Nook, Sony, etc.), .pdf and .rtf (accessible for readers with print disabilities): https://www.smashwords.com/books/view/405450

Or, find it on Amazon at: http://www.amazon.com/Out-The-Night-Phyllis-Campbell-ebook/dp/B00IA04IXW

Be sure to catch Phyllis’s Writing Process Blog Tour contribution right here next Monday at: http://DonnaWHill.com 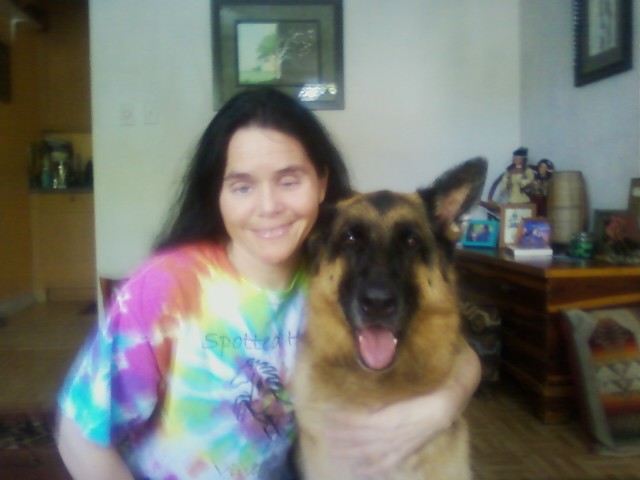 Amy Krout-Horn, Oieihake Win (Last Word Woman) has resided in two worlds; the world of the sighted and the world of the blind. She has been a writer in both of them. She is the co-author of Transcendence (All Things That Matter Press 2009), which received the National Indie Excellence Award 2012 for visionary fiction. Treat yourself to the audio version: http://www.audible.com.au/pd/Fiction/Transcendence-Audiobook/B00FOBT2CW

She is also the author of the highly-praised autobiographical novel, My Father’s Blood (All Things That Matter Press 2011). Pick up a copy At: http://www.amazon.com/My-Fathers-Blood-Amy-Krout-Horn/dp/0984639292

Her work is included in the anthology, Unraveling the Spreading Cloth of Time: Indigenous Thoughts Concerning the Universe (Renegade Planets Publishing 2013).

Amy, whose ancestry is Lakota, worked as the first blind teaching assistant at the University of Minnesota’s American Indian Studies program. A staunch advocate for social and environmental justice, she writes and lectures on native history and culture, diabetes and disability, and humanity’s connection and commitment to the natural world. For more information, visit her web site at: http://www.nativeearthwords.com

Be sure to catch Amy’s Writing Process Blog Tour contribution right here next Monday at: http://DonnaWHill.com

Donna W. Hill is a writer, speaker, animal lover and avid knitter from Pennsylvania's Endless Mountains. Her first novel, The Heart of Applebutter Hill, is an adventure-mystery with excursions into fantasy for general audiences. Professionals in the fields of education and the arts have endorsed it as a diversity, inclusion and anti-bullying resource for junior high through college. A songwriter with three albums, Hill provided educational and motivational programs in the Greater Philadelphia area for fifteen years before moving to the mountains. Her essay, "Satori Green" appears in Richard Singer's Now, Embracing the Present Moment (2010, O-Books), and her cancer-survivor story is in Dawn Colclasure’s On the Wings of Pink Angels (2012). From 2009 through 2013, Hill was an online journalist for numerous publications, covering topics ranging from nature, health care and accessibility to music, knitting and chocolate. She is an experienced talk show guest and guest blogger and presents workshops about writing and her novel for school, university, community and business groups. The Heart of Applebutter Hill is available in print and e-versions at Amazon, B&N, Apple, Sony, Smashwords, Create Space and other outlets. It is also available through Bookshare for readers with print disabilities.
View all posts by Donna W. Hill →
This entry was posted in Blindness, Self-Publishing, Visually Impaired, Wrighting, young adult and tagged Amy Krout-Horn, blindness, book reviews, Donna W. Hill, editing, fantasy, high school mystery, Killing Casanova, Lakota Sioux, My Father's Blood, Novels, Out of the Night, Phyllis Campbell, publishing, The Heart of Applebutter Hill, Traci McDonald, Visually impaired, Writing Process Blog Tour, writing tips, young adult. Bookmark the permalink.