The New Dog Under the Table, Explanations of My Absence and a Request

It’s been almost three years since my last original post. You would think I’d forgotten that I am a writer. In fact, The Hills have had major distractions in the intervening years — many of which have been unpleasant to say the least. Now, I am trying to get back to it, so I wanted to give you an overview of what’s been going on and what’s coming. I would also like your feedback. 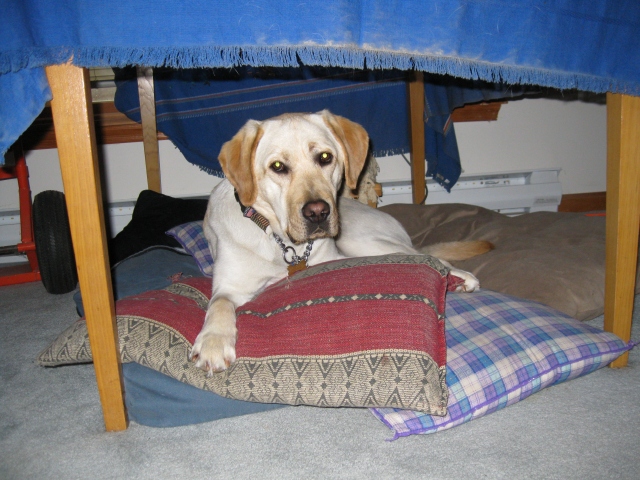 My black Lab guide dog, Hunter, passed on in March of 2016 just after turning thirteen. He was the dog who helped me learn to use a computer, and that alone should qualify him for a full-blown tribute post. I’ve been working on it since he passed. If that’s not writer’s block, I don’t know what is.

About a year later, I received my new boy, a yellow Lab named Mo. He’s my fifth guide dog — all from GDF. The thing is that this time around everything was totally different. Many of the things I learned since ’71, when I received my first guy, a black Lab named Simba, have changed significantly. Some changes were for the better; some not so much. Some, I’m still not sure about.

Of course, I want to write about Hunter and Mo and our dear kitty, Goofus, but there are many other things on my mind. I have realized that I miss writing articles about this and that, as I used to do for a number of online magazines. Since the ones that paid have for the most part changed or gone under, and since they didn’t pay that much to begin with, a change is necessary. Those realities plus ongoing accessibility issues have convinced me that just doing the same thing as part of my blog would probably bring me at least as much satisfaction. I’d also like to make a section on my website to collect the older articles.

I still want to write about writing and my novel The Heart of Applebutter Hill, and do occasional book reviews of things I’ve found and enjoyed. There’s always knitting; I’m facinated with how and why it works the way it does. I am also compelled to talk about experiences that I and other blind people have had and speculate about their meaning.

My husband and I have adopted a five minute rule about prattling on about our medical issues in public. So, how to convert five minutes into words? How about one paragraph for Rich, and I’ll share mine with Hunter?

In 2013, Rich was hospitalized seven times with severe pain. Thanks only to serendipity, he was ultimately diagnosed with “neuro” or CNS Lyme disease. He had a month of intravenous Ceftriaxone (an antibiotic that bridges the blood-brain barrier). He has permanent nerve damage throughout his body. Meds allow him to make a dent in the pain. His greatest strength is his bull-headedness. He goes from cutting down trees for firewood to crashing for days.

As Rich stabilized, Hunter came down with Lymphocytic-Plasmacytic Enteritis, the major form of canine IBD (inflammatory bowel disease). He lost ten pounds and a lot of hair. We stabilized him for about a year till we had to put him down. Then, I went from two carpal tunnel surgeries to surgery for a major hiatal hernia, a diagnosis of Barrett’s esophagus, idiopathic pancreatitis and non-alcoholic liver disease. And, both of Rich’s brothers passed away.

If any of you have questions or subjects that you would like me to address in a post, please let me know. You can either use the comment section of this or any other post, or you can use the “Contact the Author” form on any page of this site; just look for the link near the top of the page.

Donna W. Hill is a writer, speaker, animal lover and avid knitter from Pennsylvania's Endless Mountains. Her first novel, The Heart of Applebutter Hill, is an adventure-mystery with excursions into fantasy for general audiences. Professionals in the fields of education and the arts have endorsed it as a diversity, inclusion and anti-bullying resource for junior high through college. A songwriter with three albums, Hill provided educational and motivational programs in the Greater Philadelphia area for fifteen years before moving to the mountains. Her essay, "Satori Green" appears in Richard Singer's Now, Embracing the Present Moment (2010, O-Books), and her cancer-survivor story is in Dawn Colclasure’s On the Wings of Pink Angels (2012). From 2009 through 2013, Hill was an online journalist for numerous publications, covering topics ranging from nature, health care and accessibility to music, knitting and chocolate. She is an experienced talk show guest and guest blogger and presents workshops about writing and her novel for school, university, community and business groups. The Heart of Applebutter Hill is available in print and e-versions at Amazon, B&N, Apple, Sony, Smashwords, Create Space and other outlets. It is also available through Bookshare for readers with print disabilities.
View all posts by Donna W. Hill →
This entry was posted in authors, Blindness, Cats & Dogs, Guide dogs, novel, Uncategorized and tagged author, blind, cats, Guide dogs, novelist, The Heart of Applebutter Hill, Visually impaired. Bookmark the permalink.

2 Responses to The New Dog Under the Table, Explanations of My Absence and a Request