Do you take comfort in certain manmade structures? Two of my top three – lighthouses and covered bridges – have virtually universal appeal. Lighthouses are beacons of hope, turning unforeseen disasters into visible rock formations, skirted with a flick of the helmsman’s wrist. Covered bridges, with their rustic beauty, promise shelter from the storms and safe passage over the rapids for the weary traveler. But, locks? What’s up with that?

Ever since first grade when Mrs. Myers told us about the Erie Canal, I have been fascinated. So, what’s so special about manmade waterways? After all, Nature does waterways with a flair for beauty and detail that eludes mere mortals. But, if you look more closely, the reasons behind these structures and how they work might just capture your imagination, as they have mine.

Streams and rivers are wonderful ways to transport people and their belongings … that is, if you don’t mind carrying your boat and supplies every time you encounter rapids, waterfalls, marshes and dry land. In the case of the Panama Canal, oceans work, but who wants to travel all the way around South America? If you want to take advantage of shipping via water, which is still the cheapest option, Nature’s best just doesn’t quite cut it. Canals provide an efficient remedy.

The Erie Canal opened in 1825, and has undergone many expansions and enlargements since. The concept, however, has remained the same. Instead of trying to navigate moving water that twists and turns and gradually and often not so gradually descends or ascends, canals are straight and level.

Moving to higher or lower elevations is accomplished by raising or lowering the level of a section of the canal until it reaches the level of the next leg of the journey. This is not quite as simple as filling and draining a bathtub. From the Hudson River to Rome, New York represented a change in elevation of 420 ft. The canal then descended 363 ft. and rose again to 565.5 ft. at Lake Erie. This was accomplished with a series of engineering masterpieces called locks.

Locks: What they are & How They Work

A lock is a two-part gate across the water, a temporary dam that can be removed and put in place as the situation requires. Leonardo da Vinci’s invention of the miter lock is still widely used today. Closed, its two halves with their 45 degree angles form a ‘V with the point facing into the current. From a little shack, the lock operator controls the locks and the valves that allow water to flow in and out. Rack and pinyon gears, nowadays powered by electric motors, open and close the locks.

The thing about using locks is that you stop traveling via your own power when you enter them. In fact, when “locking through,” your boat gets tied up with bow and stern close to the side walls. In short, you give up control and abide by the rules of the locks. Revving your engines and blowing your horn won’t help you get there any quicker. Your progress depends on someone else and something else.

Symbolism of Locks in This Writer’s Life

There have been many times when I have felt like I have entered a lock; on a gurney headed for surgery, after sending out college applications or job resumes, witnessing a loved one dealing with medical issues or the final transition from flesh to whatever lies beyond, there’s a point when the best I can do is no longer the major factor influencing the ultimate outcome. That’s when I say that I’m in the locks.

The actions of other people matter very much to all of our lives, and we are all more interdependent than we often care to acknowledge. So, to some extent we’re always in the locks. But, some situations make this crystal clear. 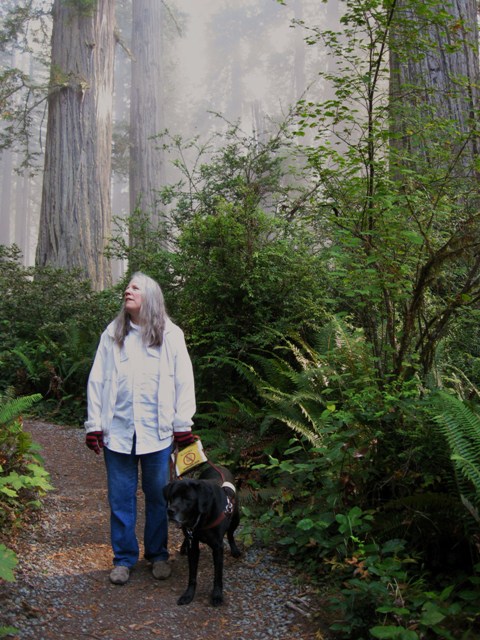 The transition from one guide dog to another, which I have already experienced three times, is definitely a lock experience. The illness of the dearest of friends, the unrelenting need for the independence that friend provides and the life interlude that is the training process with a new helper combine to create major life alterations. I’ve been blessed to have had an overwhelming amount of grace in the past, which enabled me to care for my canine friends in their final days without losing track of how special the experience is.

Our sweet Hunter is 11.5 years old, and his age alone is enough to remind me that our time together is growing short. Added to that, he has been ill this fall, and has lost a scary amount of weight and muscle mass. So far, we’ve spent over $5,000 on veterinary specialists, tests including ultrasound, endoscopy and biopsies and a host of medications and specialty foods. 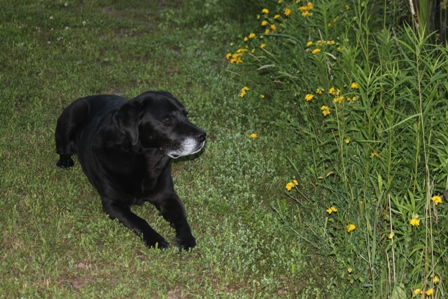 Hunter has been diagnosed with inflammatory bowel disease (IBD), not to be confused with Irritable Bowel Syndrome. IBD is an autoimmune disorder, the causes of which are not yet clearly understood. The type Hunter has, Canine Lymphocytic-Plasmacytic Gastroenteritis, occurs when lymph and plasma cells make their way into the lining of the stomach and small intestine. The resulting inflammation makes it difficult for nutrients to be absorbed – hence, the weight loss.

It isn’t fatal, if it is managed. So far, however, he has dropped from 67 to 55lbs. He still enjoys playing a bit with his ball, romping in the snow and going for rides in the car. Eating, however, is problematic. This is a Labrador retriever, so that’s about as abnormal as it gets. Appetite stimulants and hand-feeding are helping, but progress, if there is to be any, is proving to be painfully slow.

IBD is a chronic disease; i.e. it’s not curable. It’s possible that he will recover or at least reach a new normal that will allow him to regain some measure of strength and health. It is also possible that despite our efforts and those of the caring veterinary professionals who have been working with him, that we’ve missed something. Only time will tell.

The View Beyond the Bow

Unlike the locks we love on the Erie Canal, we don’t understand this life transition enough to be certain which way we are headed. We’re securely tied to the canal, waiting for word from the lock operator about how to proceed. Is the water rising or falling? Will the next phase of the journey be open waters or yet another lock? Whatever the final outcome, we will be diligent and listen for the lock operator’s promptings.

The Erie Canal: Making it Work

The Erie Canal: the Lock

New York State Canal System: How to “Lock Through”

Tips for Locking Through

Things to Do on the Erie Canal

Inflammatory Bowel Disease Due to Lymphocytes and Plasma in Dogs – PetMD

Diets for Pets with Gastrointestinal Disease from PetMeds (r)

Donna W. Hill is a writer, speaker, animal lover and avid knitter from Pennsylvania's Endless Mountains. Her first novel, The Heart of Applebutter Hill, is an adventure-mystery with excursions into fantasy for general audiences. Professionals in the fields of education and the arts have endorsed it as a diversity, inclusion and anti-bullying resource for junior high through college. A songwriter with three albums, Hill provided educational and motivational programs in the Greater Philadelphia area for fifteen years before moving to the mountains. Her essay, "Satori Green" appears in Richard Singer's Now, Embracing the Present Moment (2010, O-Books), and her cancer-survivor story is in Dawn Colclasure’s On the Wings of Pink Angels (2012). From 2009 through 2013, Hill was an online journalist for numerous publications, covering topics ranging from nature, health care and accessibility to music, knitting and chocolate. She is an experienced talk show guest and guest blogger and presents workshops about writing and her novel for school, university, community and business groups. The Heart of Applebutter Hill is available in print and e-versions at Amazon, B&N, Apple, Sony, Smashwords, Create Space and other outlets. It is also available through Bookshare for readers with print disabilities.
View all posts by Donna W. Hill →
This entry was posted in authors, Blindness, Cats & Dogs, Dogs, Guide dogs, Service Dogs, Visually Impaired, Wrighting and tagged author, dogs, Erie Canal, Guide dogs, IBD, locks, Longreads, pet health, service dogs, symbolism, veterinary, WPLongform, writing. Bookmark the permalink.